I stated in an earlier post that I was casting my vote for Ted Cruz in the Republican primary; however, the growing violence at Donald Trump rallies has given me cause to post this brief observation.
Rather than the news media exploring and reporting on the backgrounds of those who are not only organizing anti-Trump rallies, but are threatening violence in an effort to shut down Donald Trump’s right of free speech guaranteed under the 1st Amendment, reporters and news outlets are racing to blame Trump’s rhetoric for the violent confrontations.

I invite you to watch and listen to this video that exposes the growing threats of assassination on the Republican front runner’s life.  I believe there is something more cynical and threatening to our democracy than a protest movement taking aim at one man.
Reflecting on how the peaceful Tea Party was consistently painted by the media as some right-wing fanatical movement in 2009, I am struck by the free pass the Black Lives Matter movement is given as they have encouraged riots in America’s cities, made threats of violence, disrupted political rallies and attacked the right of free speech, but not suffer a word of criticism from politicians or reporters. 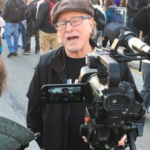