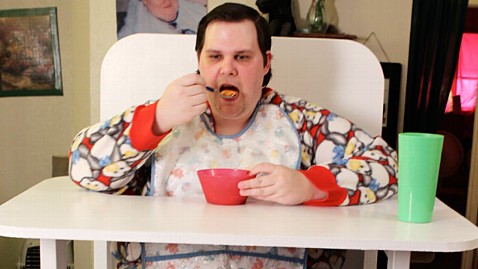 I have discovered a whole new “civil rights group” that needs special coddling and care…Adults who “self-identify” as infants and toddlers.

For far too long, we have taken for granted the plight of adults who act like spoiled rotten, self-indulgent, narcissistic children and believe the world owes them and should cater to their whims.  Regardless of how tripe, ridiculous, and inane their beliefs and demands, Americans can no longer ignore, nor slight the perceived rights of this segment of society (their number could be as high as .03%, meaning 99.97% of our neighbors need to be punished, mocked and scorned for their dismissive attitude toward adults who self-identify as infants).

Some will attack this commentary, dismissing my concerns and attacking me as foolish, silly and sick.  Some will demean me for suggesting we protect and offer civil rights protection to this new group of “self-identifying adult infants”! 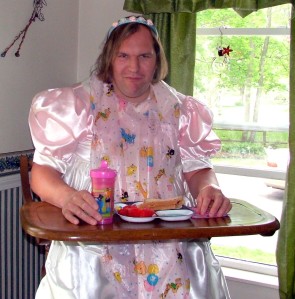 I know you are out there and I want you to know that, because you disagree with me, you are ignorant, bigoted, prejudiced, hateful, and have no concept of what it means to “love thy neighbor”!  You live in your little bubble world where you expect adults to act like adults.  You have no right to criticize my concerns, especially since some of you do not know and have never met an adult who self-identifies as an infant or toddler (of course, parents and college professors who know college millennials demanding “safe-spaces” may identify similar infantile characteristics in them).

I am demanding sensitivity to my new civil rights group.   They have a right for their cries to be heard.  They have the right to be treated as normal and their demands to be fed from giant baby bottles and have super-sized adult-diaper changing tables installed in public buildings, mall restrooms, showers and locker rooms must be accommodated.

For those sensitive to the plight of adults who “self-identify as infants and toddlers”, I invite you to join me in the following demands.

1) I propose diaper changing tables for adults who self-identify as infants be installed in all restrooms of public buildings, including public schools and shopping malls.

2) I propose that shopping mall playgrounds no longer slight and deny the civil rights of adults who self-identify as toddlers.  They have the right to run, jump and play on frogs, hamburgers, and hot dogs.  For far too long, shopping malls have been allowed to discriminate against children taller than 42 inches! 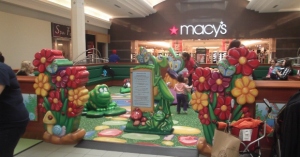 3) I propose that adults who self-identify as toddlers and children be given special protections under federal law, including the provision of adult car seats, restaurant high chairs, and strollers.

4) I further propose that adults who self-identify as infants and toddlers not be discriminated against for employment or housing.  Dirty diaper or not, it is mean and discriminatory to judge people by their appearance or delusion!

Finally, I am calling for President Obama, the Department of Justice, the Department of Education, and presumptive Democratic nominee for president, Hillary Clinton, to stand up for the disenfranchised self-identifying adult infants and toddlers.  I am asking 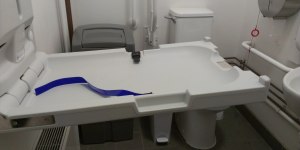 TARGET, Marshalls, Ross, and other retailers to stop discriminating against adults who self-identify as infants and toddlers and install adult diaper changing tables immediately!

Who will join my cause? Who will stand up for America’s newest minority civil rights group and demand that adult diaper changing tables be installed in America’s public bathrooms? 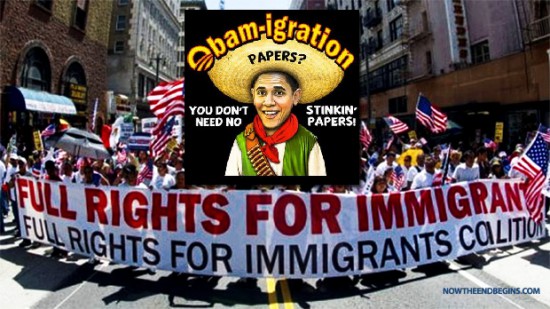 This is a brief follow-up to my observation that pseudo-religious organizations are enriching themselves as puppets of the federal government in the resettlement of illegal aliens across the USA.

I am attaching a list of “charities” who are cooperating with the federal government in the resettlement of illegals, many of whom are not only aliens to our culture, but enemies of our liberties and democracy. 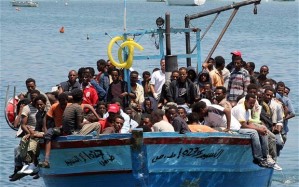 Whether blinded by a sincere, but misguided spirit of charity that fails to see the societal cancer they are resettling into our towns and cities, or covetous of the millions of dollars the federal government and its agencies are doling out, the end result is the same.  Make no mistake; the human trafficking of illegals into our communities is enriching Catholic, Lutheran, and Jewish charities.

America’s towns, especially rural communities, appear to be the target of much of the resettlement efforts.  These small communities will forever lose their identity, become more economically depressed than they already are, as public school systems, social services, and welfare programs become overwhelmed by a population that will not only fail to assimilate into our culture, but pays no taxes, is undereducated, and brings no skills for gainful employment. 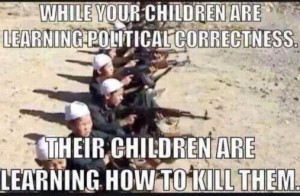 These circumstances will inevitably contribute to a spirit of resentment and lawlessness that will make victims of us all and leave our sons and daughters scarred by a rising tide of physical violence that we are witnessing in Europe.

* For my own defense, I am not against legal immigration. Some of the finest citizens I know, many who are my dearest friends, are legal immigrants and citizens who passionately love this nation. Many have served in our military and share my conviction that what is happening to our nation is devastating and demoralizing. 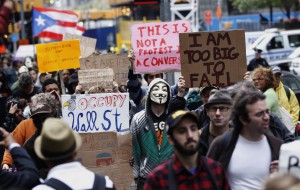 I am taking liberty to address three proverbs from Proverbs 12 that do not follow in succession in the chapter, but nevertheless address a the same theme—the failed character of the slothful, indolent, lazy man (Proverbs 12:11, 24, 27). As you have learned from prior devotions, Solomon has some plainspoken principles for us in the matter of labor and its reward. 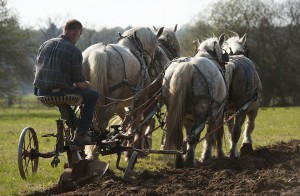 A hardworking man enjoys the fruit of his labor. Like the farmer in today’s parable, he comes to the end of a workday and reflects on the satisfaction of his labor. He has little time for the pursuit of pleasures and finds his contentment in the reward of his work. The disgruntled poor, many of who do not bear the yoke of labor, often comes to his state because of a pattern of indolence. He follows, according to Solomon, vain individuals who lack the heart for work and pursue pleasures that are time-consuming and empty.  [If you doubt this conclusion, consider how many consider themselves poor, but have funds to own televisions, computer games, cell phones and waste multiple hours a day entertaining themselves].

Solomon contrast the character of the diligent worker with the slothful inProverbs 12:24.

Proverbs 12:24 – “The hand [power; rule] of the diligent [determined; sharp; decisive] shall bear rule [govern; reign; rule over; have dominion]: but the slothful[slack; idle; deceitful] shall be under tribute [taskmasters; forced labor; serving a superior].”

Liberal, socialist-minded politicians have spent the past few decades inflaming an attitude of entitlement in our culture that is tearing at the fabric of our national character. A spirit of industry and self-reliance built America. A man knew the reward of hard work was recognition and promotion and it was not unusual for an employee to begin pushing a broom in a company and work his way to the top.

Rather than promotion, the slothful man finds himself stuck on a tier of servitude. He may chafe with the lack of reward and advancement; however, he has only himself to blame! He is the epitome of the “Occupy Wall Street” crowd who demand an equality they have not earned and resent the success of those who, through the sweat of their brows, enjoy the fruit of their labor. 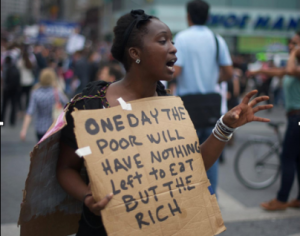 I ask your indulgence as I proffer a personal commentary: The news that nearly 50% of Americans are on some form of government assistance/subsidy does not bode well for our nation’s future.  Granted, many of those drawing government checks are retirees and some legitimately on disability who have “paid into the system” and by law and rights are drawing their monthly Social Security checks.  A few are unemployed and continue to look for work in an economy that is nothing short of dismal.

How did we get here? My opinion is for a half century we have elected politicians that have cultivated a growing dependence on government and America is hurtling headlong into a socialist state with 109 million in 2011 feeding at the welfare trough. A January 22, 2014 report suggests the actual unemployment rate in the United States is as high as 37.2% (this is before government hacks massage the numbers) and households receiving “food stamps” total over 115 million (now known as SNAP – Supplemental Nutrition Assistance Program). Food stamps alone cost the American economy nearly $80 billion in 2013.

I am for assisting my fellow man going through hard times and helping him get back on his feet.  I am not for sustaining a culture that rewards indolence and punishes the industrious! Sadly, we have become that nation and, if we do not guard our own hearts, the slothfulness of our culture will take hold in our lives, family and churches.

My closing proverb for today isProverbs 12:27.

Proverbs 12:27 – “The slothfulman [slack; idle; deceitful] roasteth not that which he took in hunting [too lazy to dress and prepare for dinner what he killed in the hunt]: but the substance [reward] of a diligent man is precious [valuable].”

You ask, “What does it mean?”  Some people are so slothful that, like a hunter who is too lazy to dress and prepare the meat he took from his hunt, they ignore opportunity when it knocks on their door.

My friend, you are either slothful or diligent in your work!