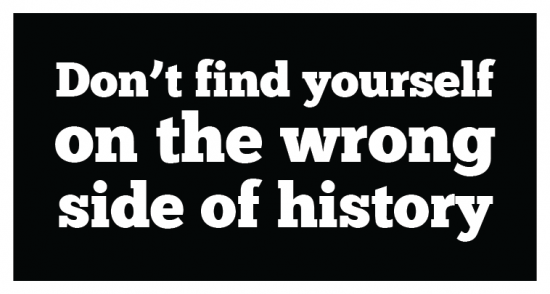 I am not sure who coined the term, but I have engaged with a few radical, left-wing, immoralists who, after arguing in favor of non-traditional, anti-family, and anti-God morality (i.e. legalized “gay marriage” or the new political lightning rod, “Transgender” rights) attempt to shut down all discussion with the “fait accompli”, “You are on the wrong side of history”.

President Obama, his administration, liberal activists and the media, all purveyors of a “new morality”, have defended their immoralists’ positions arguing conservatives who adhere to Biblical morality and traditional family values are “on the wrong side of history”.

Writer for the New York Post, Jonah Goldberg, observed in a March 21, 2014 article titled, “The pathetic ‘wrong side of history’ plea” that, “In domestic politics, people (mostly liberals) tend to say, ‘You’re on the wrong side of history’ about social issues that are breaking their way. It’s a handy phrase, loosely translated as, ‘You’re going to lose eventually, so why don’t you give up now?’”

Goldberg continued in the same article noting the “wrong side of history” argument is Marxist in origin and was employed by Karl Marx to argue “that opposition to the inevitability of socialism was anti-intellectual and anti-scientific”.

I find Goldberg’s observation insightful because that is exactly the argument purveyors of immorality make as they dare anyone to challenge their campaign for the abnormal under the guise of “civil rights” regardless how depraved or unnatural their cause (i.e. giving a status of normalcy to “boys self-identifying as girls or girls self-identifying as boys).

Who empowered liberals to become arbiters of the right or the wrong side of history?   Who appointed the President and his liberal consortium to become authorities in matters of morality?

No, I am not intimidated by a liberal’s assertion, “You are on the wrong side of history”.   My concern is not a progressive antagonist’s interpretation of history past, but the history I am living and legacy my generation will inevitably leave as its history lesson.

Christian friend, the author of “His-Story” is the God of Eternity; Sovereign, Righteous, Holy, Just and my Savior.  I have no interest in being on the “right side” of an immoralist’s view of history.  I am on the side of the Author of “His-Story” Who has said, “I am the Lord, I change not” (Malachi 3:6).